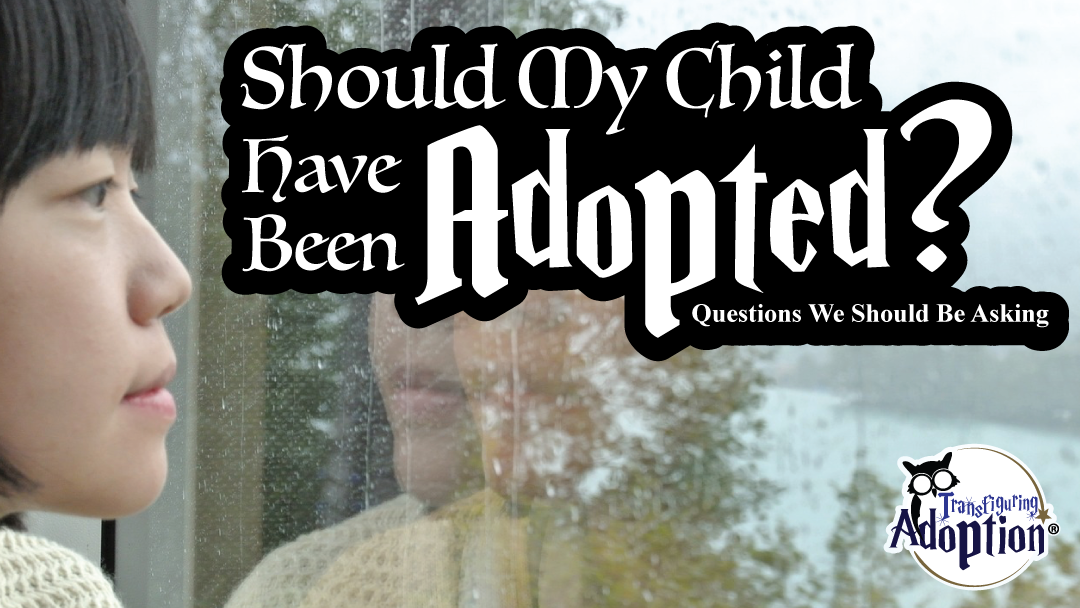 A couple weeks ago, the movie Instant Family was released on iTunes, and Darren and I watched it for the first time. The story is based on the experiences of the producer and his wife and other families who have instantly become parents to sibling groups through fostering to adopt. There is a point in the movie during which the character Ellie is watching her three foster children join their birth mom for a visit, and she tells her husband she feels like they’re breaking up a family. He responds that they did not remove the children from their birth mom and that they are not the ones to make the decision of whether or not her rights should be terminated. While this is correct, there are further questions we all have a responsibility to ask.

Many adoptive parents wonder, “Should my child have been adopted?” Often it is asked in the context of the parent feeling like they have failed or messed up and wondering if the child would be better off with their birth family or a different adoptive family. Ideally, this should be asked BEFORE a child is adopted, but adoptive parents often are not informed of real statistics, of real systemic issues, of corruption, and so on until they have been on the adoption journey for a while and begin to question whether their child should have ever been available for adoption in the first place. Outcomes are better for children if they can remain in their birth families. Ideally, no child should ever be adopted. We cannot go back and change whether a child was removed or whether they were placed for adoption or not, but we can and must take an honest look at systems in place for foster care and adoption and advocate for better for all children and families.

If a child is to be adopted through foster care, we should be asking:

If a child is to be adopted domestically, we should be asking:

If a child is to be adopted internationally, we should be asking:

Once during a training, I recall a trainer stating that parents have a constitutional right to raise their children. This right should only be taken away under dire circumstances, and it should not be removed simply because others think they could do a better job with the child or give them more opportunity. The ability to receive a better education, take part in activities, or receive superior nutrition does not undo the trauma that removing a child from their birth family causes. Science is proving this over and over the more neuropsychology and other fields are revealing about the consequences to children, even those removed at birth.

Often adult adoptees and former foster youth question where we stand on issues as the co-founders of Transfiguring adoption, an organization that seeks to help foster and adoptive parents. Just because we seek to improve adoptive situations, it does not mean that we believe adoption is the best option. In many cases, it is not! Kids do better in their birth families. Adoption is not sunshine and rainbows. It always begins with trauma. More resources should be diverted to preserving families and preventing removal, and adoption should be a last resort.