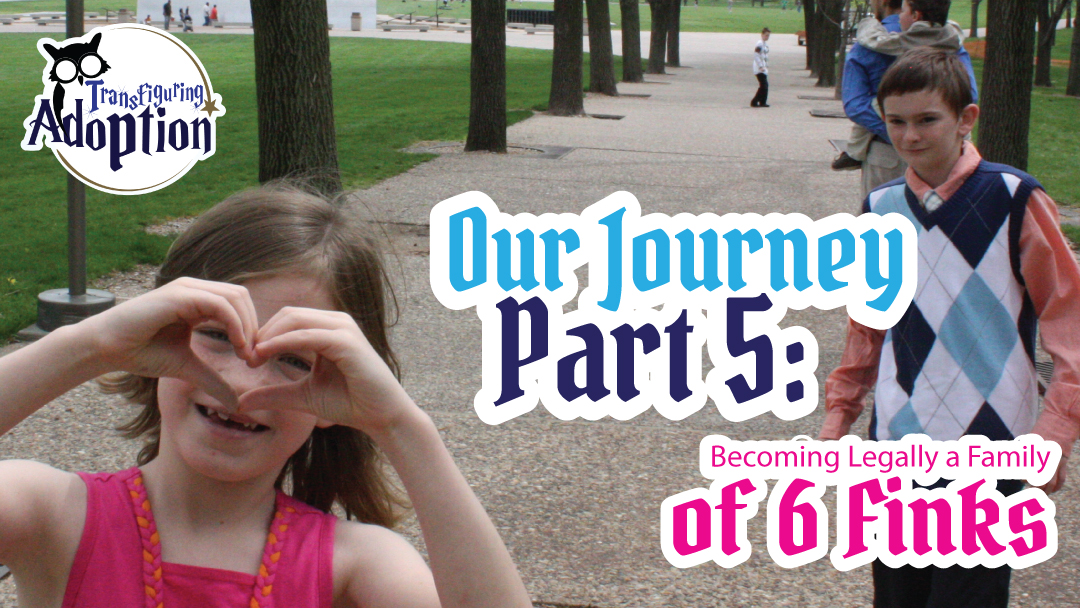 In Our Journey Part 4, I talked about the period of time that seemed to stretch on and on between when our kids moved in and when they experienced permanency—in their cases, adoption. As I titled it, that was the mucky and uncertain middle. It’s a time of not being able to make decisions for your kids or drive over state lines as a family. The biggest example of that is when one of our children was thriving in a private school (which we were paying for), and a liaison from the agency looked at me in an educational meeting and told me I was not the mom and could not make the decision, and the child needed the resources at the public school and would start there the next day. I have never wanted to slap someone so much in my life. I wanted to scream and shout and ask, “And who’s fault is that? This child has lived with us over a year, rights were already terminated, and who hasn’t gotten adoption done!?” To this day we live with the fallout of a decision made for our child against our will. It became evident over the next year how negatively that child was impacted and continues to be to this day by that one seemingly insignificant (to that man) decision.

The Much Anticipated Finalization Days

Needless to say, words cannot express how excited we were to be done with the kids being in state custody. We were ready to just be a family. It’s amazing how long finalizing an adoption can take. While you’re told the children need to live with you 6 months and you can finalize, the reality is caseworkers go on maternity leave, court gets postponed, budget cuts mean less workers to approve the adoption agreements, and on and on it may go.

Though our boys came to live with us after the other two, they were the first to have adoption day since rights were already terminated when they moved in, and they came as an adoptive placement. (You can imagine the tension that caused for our littles who wanted permanency so badly!) April 18, 2011, was special in so many ways. That day was chosen because our boys’ two younger biological siblings would be in town visiting from their new out-of-state home, and they were also finalizing their adoption. So, we all went in to the courtroom together, one huge entourage. It was a huge day for their siblings’ family as they had lived with their foster parents almost the entire 7 years, so while we were really ready for adoption to be final, their foster parents had had to endure much longer than we had, though their children had had much more consistency and stability than our boys who had been moved 7 times in those 7 years. Everyone was ready!

Court went without a hitch, we took tons of pictures and then went out to eat with their bio sibs’ family. We continued on to St. Louis for a day of sight-seeing. We met some friends who lived there (who were also fostering and adopting) at the zoo, we visited the Arch, and we went out to eat at a really cool restaurant. It was a sweet, sweet day.

February 16, 2012, was the culmination of our foster/adoption process with our four kiddos. Super cool was the fact that our attorney unknowingly picked Darren’s birthday as the court date. Court was filled with smiles and laughs, the biggest of which happened after the judge asked our daughter if she was the only girl in the whole crew and then asked her if she could handle that. She emphatically answered no in the microphone. Our little 5-year-old son must have thought the adoption would be undone, because he leaned toward the mic and exclaimed, “Oh, crud!” and smacked his forehead. The courtroom erupted in laughter.

We walked out of the courthouse that day, and three things happened, all of which we knew were total game-changers.

Adoption meant so many positive changes. It is not the end of the journey, however. Adoption is said to be a miracle, but the events that lead to adoption always contain grief and trauma for all involved (birth family, child, and adoptive family). Healing is an ongoing process that we all must undertake daily, but it sure is nice to be able to do so as a legal family without a government entity telling us how it must be done! And so we went on from February, 2012, as 6 legal Finks. 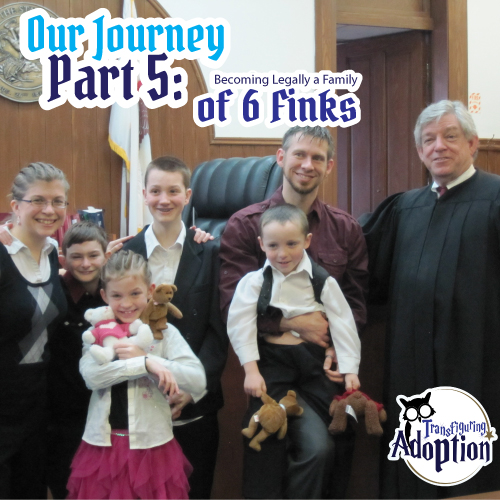 0 0
Previous ArticleStar of the WeekNext ArticleHow I Was Adopted