from the quill of Jasmine Fink

It was really crowded at Universal Studio’s Diagon Alley area when we had to put our stuff in a locker. The park will not allow any bags or loose items on the ride so you are allowed a complimentary locker for a short amount of time. Then, we had to wait in line for a little bit. It was kinda cool waiting to ride. At the front, where you first walk into the building, there are some goblins working at the bank teller stations and one talks to you. The other goblins are working in a huge hall of Gringotts Bank that has three huge chandliers. [The whole story behind the ride is that you are a Muggle (a non-magical person) here to open up an account at Gringotts Bank.]

After you wait for a while in the main bank hall/lobby, you go through a smaller back hall of the bank. [You pass offices of the various goblins that work at the bank. If you pay attention you will even see the goblin Griphook’s office. Griphook is a big part of the Harry Potter books. Visitors then walk into Bill Weasley’s office. Bill is a wizard and brother to one of the main characters in the books. Bill and another goblin show up in the office via video screen to tell you that they are taking you to your vault in the underground caverns.] After passing through Bill’s office, you are led into an elevator. You have to go down to the caverns to get to your vault that you are opening. Next, you get some 3D glasses. Then, you go up some stairs, and some staff ask how many people are in your party. After that, you are seated by four into ride carts. Next, you ride through a fantastic and realistic ride. I think that everyone should be able to go ride Escape from Gringotts.

The ride was very enjoyable for us because we like fast and jerky rides. There was a part where you got sprayed by a few drops of water, but isn’t very wet. We got thrown, hit, and spun. It was a lot like the sister ride in the Wizarding World, The Forbidden Journey, but this ride is in 3D and not as scary. (There are no spiders.)

[Spoiler Alert – My description of the ride itself] 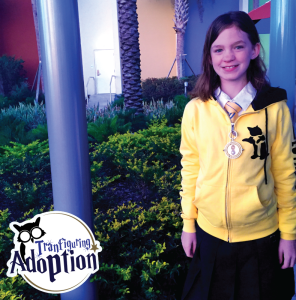 You are trying to open an bank account. [You begin your descent into the caverns in your Gringotts cart. Bill and his goblin friend show up on a track ahead of you to attach their cart to yours.] The defenses are set off because there are imposters in the bank somewhere. Bellatrix, an evil witch, is warned and finds you thinking that you’re the imposters trying to steal from her bank vault. She hits you with a spell. You go down a tunnel on the cart and Bill Weasley [saves you by casting a spell that halts the cart. You see Harry Potter, Hermoine Granger, and Ron Weasley in another cart. They tell Bill that they are hunting horcruxes (magical items keeping the evil wizard Voldemort alive). The bank defenses throw the trio from their cart and trolls show up to take care of you in your cart.] Trolls throw you [and knock you off the cart track and you begin falling. Bill shows up again to hit you with a spell that ceases your falling.] You land at the spot Harry, Hermoine, and Ron are on the dragon and Bill saves you from the dragon’s fire by casting a water charm. Then, you are told to go into your vault, because you’ll be safe from Bellatrix and Voldemort in there. Voldemort breaks through the wall of the vault. Bellatrix is also there and she tries to torture you. [Both of them know that you saw Harry Potter and think you know where he is at.] Voldamort says, “Maybe a little dose of pain to help you remember!” Then, he blows a big ball of fire, but the trio on the dragon shows up and blows the fireball away. Last, Harry, Hermoine, and Ron get you out of the caverns, but I won’t tell you how. You have to ride the ride yourself.

Note: This ride may be loud for smaller children.