From the Cover of Uncharted (2022) by Sony Pictures:

Street-smart thief Nathan Drake (Tom Holland) is recruited by seasoned treasure hunter Victor “Sully” Sullivan (Mark Wahlberg) to recover a fortune lost by Ferdinand Magellan 500 years ago. What starts as a heist job for the duo becomes a globe-trotting, white-knuckle race to reach the prize before the ruthless Moncada (Antonio Banderas), who believes he and his family are the rightful heirs. If Nate and Sully can decipher the clues and solve one of the world’s oldest mysteries, they stand to find $5 billion in treasure and perhaps even Nate’s long-lost brother…but only if they can learn to work together.”

Uncharted (2022) is a treasure-hunting adventure based on the series of PlayStation video games and stars Tom Holland and Mark Wahlberg. The movie is fun, though pretty violent and definitely earns its PG-13 rating. Families should use caution before going to see this one- in addition to the violence, the characters are constantly betraying one another and the movie seems to send a message that people are generally unreliable and cannot be trusted. As this is something children and teens who have experienced trauma already have difficulty with, it may be one to steer clear of. Or at the very least, watch ahead of time or wait until you can watch at home. There are also themes of family loss and separation which may be triggering.

We see in a flashback that the main character, Nate, and his older brother Sam have lost their parents and live together in an orphanage. Sam runs away, rather than face jail time for breaking and entering, and promises to come back for Nate but never does. While we don’t see any more of their childhood other than this brief moment it is implied that Nate grew up alone and aged out of care. He is now a bartender and also engages in theft to pay his bills and doesn’t really seem to have anyone he’s close to. Nate is eager for news of his brother and even willing to go along with an illegal scheme with a stranger due to the promise of possibly seeing his brother again. Children with backgrounds of trauma will likely relate strongly to Nate’s feelings of abandonment and desire for connection as well as Sam’s desire to live life on his own terms. 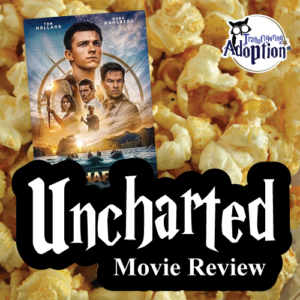