From the Cover of Thor: Love and Thunder by Disney/Marvel:

“Thor: Love and Thunder” finds Thor (Chris Hemsworth) on a journey unlike anything he’s ever faced — a quest for inner peace. But his retirement is interrupted by a galactic killer known as Gorr the God Butcher (Christian Bale), who seeks the extinction of the gods. To combat the threat, Thor enlists the help of King Valkyrie (Tessa Thompson), Korg (Taika Waititi) and ex-girlfriend Jane Foster (Natalie Portman), who — to Thor’s surprise — inexplicably wields his magical hammer, Mjolnir, as the Mighty Thor. Together, they embark upon a harrowing cosmic adventure to uncover the mystery of the God Butcher’s vengeance and stop him before it’s too late.”

Thor: Love and Thunder (2022) is the 4th Thor movie in the Marvel Cinematic Universe (MCU) and takes place sometime after the events of Avengers: End Game (2019), in which Thor sets off with the Guardians of the Galaxy. While the movie can be viewed on its own, it may be helpful to have seen some of the previous Thor and Guardians of the Galaxy movies. However, the narrator does a pretty good job of recapping the highlights of Thor’s story. For the most part the violence and action is on par with other Marvel superhero movies, and overall, the film has a lighthearted tone, though there are darker moments and themes. The scenes with the villain, Gorr the God Butcher and his shadow monsters may be especially frightening for younger viewers. Overall, the movie is recommended for older children and teens and is probably one to watch together so you can help navigate some of the more complicated topics addressed.

At this point in the MCU timeline Thor has lost his entire biological family (mother, father, and brother Loki) as well as his found family of the Avengers and is still reeling from all of this loss. We see him briefly traveling with the Guardians of the Galaxy, another found family but one he doesn’t quite fit into. To top it all off his ex-girlfriend Jane Foster comes back into his life only for him to find out she’s dying. These themes of processing loss and trying to find a place in the world in the aftermath of that grief are likely to resonate very strongly with children who have backgrounds of trauma. And ultimately at the end of the film we briefly see Thor become the guardian to a child who loses her own father.

Jenn is a central Virginia native who received her BA in Psychology from the University of Virginia in 2012. Since then she has worked for a local mental health agency and the Department of Social Services in various capacities and has been involved in her community’s efforts to create a Trauma Informed Network. Currently Jenn works in vocational rehab and mentors youth in foster care. When she isn’t working, Jenn enjoys writing stories, watching Marvel movies, visiting theme parks, and spending time with her nieces and nephew. 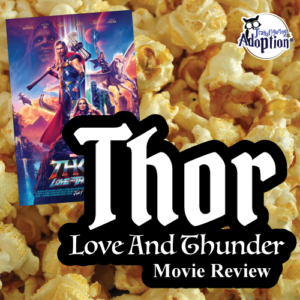