From the Cover of Pokémon: Diamond and Pokémon : Pearl (2004) by Nintendo:

“Welcome to the next generation of Pokemon! Asa rookie Pokémon Trainer, you will need to catch, train, and battle Pokémon on your journey to become the Pokémon League Champion. You will face many challenges along the way, as you search for the Pokemon that rules time/space in Pokémon Diamond/Pearl version. Discover more than 100 new Pokémon in the Sinnoh Region! Watch as day turns to night with the return of the real-time clock feature!“

From the Cover of Pokémon : Brilliant Diamond and Pokémon : Shining Pearl (2021) by Nintendo:

“Revisit the Sinnoh region from the original Pokémon Diamond Version and Pokémon Pearl Version games and set off to try and become the Champion of the Pokémon League! The Pokémon Brilliant Diamond and Pokémon Shining Pearl games brings new life to these remade classics with added features. Explore the Grand Underground to dig up items and Pokémon Fossils, build a Secret Base, and more! Test your style and rhythm in a Super Contest Show. A reimagined adventure, now for the Nintendo Switch system.“

Pokémon overall is typically a pretty kid-friendly gaming franchise. As long as a child is able to read the instructions needed most kids are capable of playing the game, especially this installment of the game (both original and remake). The target audience appears to be children that are grade-school and up but some younger kiddos may be fine with some help reading. It also appears this game would be best for most families that enjoy a good RPG game. While there are no direct ties to foster care or adoption in the game there are many challenges and points that children with trauma may relate to as the main character works to become Pokémon League Champion.

While this Pokémon installment does not directly relate to foster or adoptive care the main character is a younger youth traveling about the region of Sinnoh and having to navigate new relationships and challenges now that they are eligible to become a Pokémon trainer. Gameplay is very standard of prior Pokémon games with the RPG turn-based style battles and the player working with Pokémon to earn 8 gym badges to compete in the Pokémon League and try to become League Champion. While navigating this basic game the player also works to stop Team Galactic from destroying the world by trying to create a new one with powers from rare Pokémon named Dialga and Palkia, who control time and space respectively. Thankfully the player isn’t alone as they have the help of various characters including their mom, Professor Rowan, best friend Barry, and rival Lucas or Dawn (depending on player’s choice in avatar). While hopefully your child isn’t saving the world, they are learning important skills right now such as interpersonal skills, self-responsibility, and how to make good choices in hard situations like the player. These are areas in which youth with trauma are often deficient due to having to focus more on survival than skills that will help them transition into adolescence and adulthood. With this game caregivers can allow their children to play in a world without risk of online predators or cyber bullies and with a sense of some independence. 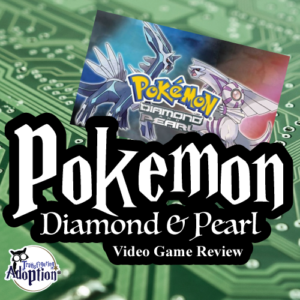