From the Cover of Percy Jackson and the Lightning Thief  by Rick Riordan:

“All year the half-bloods have been preparing for battle against the Titans, knowing the odds of victory are grim. Kronos’ army is stronger than ever, and with every god and half-blood he recruits, the evil Titan’s power only grows.

While the Olympians struggle to contain the rampaging monster Typhoon, Kronos begins his advance on New York City, where Mount Olympus stands virtually unguarded. Now it’s up to Percy Jackson and an army of young demigods to stop the Lord of Time. In this momentous final book in the New York Times best-selling Percy Jackson and the Olympians series, the long-awaited prophecy surrounding Percy’s sixteenth birthday unfolds. And as the battle for Western civilization rages on the streets of Manhattan, Percy faces a terrifying suspicion that he may be fighting against his own fate.”

About the Author: Steve Madole

I am an adoptive dad of three boys living near Grand Rapids, MI with my wife, our cats and dog. We also fostered many other children in the last 5 years! I have done many trainings with the Dr. Karen Purvis Institute and try to keep up on different trauma training’s monthly. My whole family nerds out on comic books, video games, movies and regular books! We often read a lot of the same comics and books which can lead to some awesome conversations! 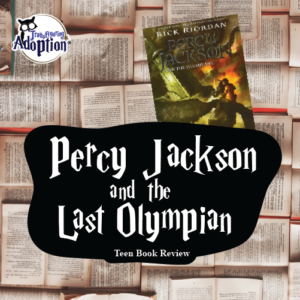