Paw Patrol: The Movie (2021) certainly took me by surprise as being a great film for children with trauma backgrounds. Granted, I’ll admit that I am very new to the Paw Patrol world so I am not sure how the pups are each added to the Patrol team but I never considered the subject of adoption to pop up as it did with this movie.

The target audience appears to be children who are toddler-aged and up. It also appears this movie would be best for any family to view, including foster and adoptive families. This film addresses a title character revisiting their pre-adoptive home and working through the emotions and memories of the past with the support of loved ones. This subject matter is handled with great care and can spark some meaningful conversation with your little ones about working through hard memories and emotions, relying on meaningful relationships during times of distress, and reframing experiences.

This is a wonderful opportunity to connect children with trauma with their emotions and thoughts through the experience of Chase, the police-themed German Shepherd pup. It’s revealed through the course of the movie that Chase was abandoned as a very small puppy in Adventure City prior to his adoption with Ryder. He then moved to Adventure Bay (where the majority of the Paw Patrol series occurs) and along with Ryder became integral to the Paw Patrol Team due to his ability to scale heights and rescue people using grappling and zipline equipment. However, when the team is summoned to help Adventure City, Chase’s eager “on the case” demeanor immediately disappears and he becomes insecure, fearful, and irritable in response to various trauma triggers while on the job. Children with trauma may relate to these seemingly random and out of control feelings and resulting behaviors as this reflects how younger children often respond to trauma triggers. As a result caregivers will have the opportunity to give their children the chance to learn language to connect their feelings to behavior and better communicate their needs for support as Chase learns with Ryder.

NOTE: Inclusion on these lists does not necessarily mean endorsement. Furthermore, with all our resources, we highly recommend you preview them first to determine if there are any trauma triggers that your child may not be ready to handle. Transfiguring Adoption does not intend for its reviewers nor its reviews to be professional, medical or legal advice. These reviews and discussion guides are intended to help parents to better be able to connect and understand their children who come from traumatic backgrounds. 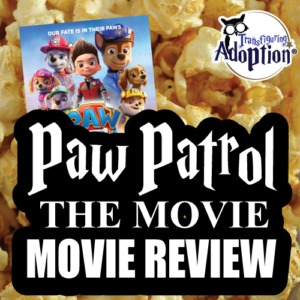