Transfiguring Adoption awarded this movie 5 Hoots out of 5 based on how useful it will be for a foster/adoptive family. [Learn more about our Hoot grading system here]

“11-year-old orphan, Félicie (Elle Fanning) has one dream – to go to Paris and become a dancer. Her best friend Victor (Nat Wolff), an imaginative but exhausting boy with a passion for creating, has a dream of his own – to become a famous inventor. In a leap of faith, Victor and Félicie leave their orphanage in pursuit of their passions. But – there’s a catch, Félicie must pretend to be the child of a wealthy family in order to gain admittance to the prestigious and competitive Opera Ballet School in Paris. And with no professional dance training, she quickly learns that talent alone is not enough to overcome the ruthless, conniving attitudes of her fellow classmates, led by the devious Camille Le Haut (Maddie Ziegler) and her wicked mother Regine (Kate McKinnon). Determined to succeed, Félicie finds her mentor in the tough and mysterious school custodian, Odette (Carly Rae Jepsen) who, along with Victor’s encouraging friendship, help her reach for the stars.”

Leap! (2017) is the American adaptation of Ballerina (2016), which was released in Europe prior. The movie is absolutely adorable and a wonderful movie to view as a family. There are plenty of cute, funny moments for children to enjoy as well as bits of situational humor to keep a parent interested (so no naps for this one, parents!). Most importantly, this film is a great medium to work through issues children may struggle with such as lying. I highly recommend this film for younger children, especially if they have aspirations for dance or ballet, but really anyone can enjoy this film. My teenager watched this one with me and absolutely loved the colorful characters and theme of found family, though she is a proud “tomboy”.

Félicie is a very relevant character for children in foster care as she is the resident of an orphanage. Though she is not mistreated, she longs to escape the orphanage to become a famous ballerina along with her best friend and inventor, Victor. Félicie and Victor are so determined to make it to Paris to pursue this dream that they have 462 escape attempts under their belts by the time of the film’s start! They successfully escape and each find a way to access their dreams. However, the biggest catch for Félicie is finding her chance under the name of Camille Le Haut, a seemingly mean girl with an even meaner momma by the name of Regine Le Haut (parents, watch out for Kate McKinnon on this one, she’s a hoot in this role!). Félicie is eventually caught in her deception and then has to work through the consequences of her actions after this discovery.

This film handles Félicie’s shortcomings in a kind but firm manner that is beneficial for caregivers to observe. Upon the discovery of Félicie’s deceit all of the adults could have understandably followed Regine’s advice in showing only harsh consequences for stealing Camille’s letter and lying about her identity. However, the adults in Félicie’s life were able to see the intent behind her deception and help her grow and learn from the experience, creating several teachable moments and allowing Félicie a chance to earn her place on stage correctly and form deeper bonds with found family. I highly recommend this film for children and adults alike for this reason! 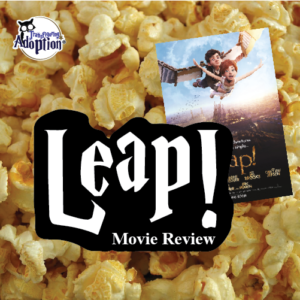