From the Cover of Fantastic Beasts: The Secrets of Dumbledore by Warner Brothers:

“Professor Albus Dumbledore (Jude Law) knows the powerful Dark wizard Gellert Grindelwald (Mads Mikkelsen) is moving to seize control of the wizarding world. Unable to stop him alone, he entrusts Magizoologist Newt Scamander (Eddie Redmayne) to lead an intrepid team of wizards, witches and one brave Muggle baker on a dangerous mission, where they encounter old and new beasts and clash with Grindelwald’s growing legion of followers. But with the stakes so high, how long can Dumbledore remain on the sidelines?

Fantastic Beasts: The Secrets of Dumbledore is the 3rd installment of the new Wizarding World Franchise, set in the same universe as Harry Potter. This installment follows the continued adventures of Newt Scamander and co. as they work with Dumbledore to defeat Grindelwald. As with the previous films of this series, the overarching plot is fairly dark though it is interspersed with a fair amount of humor and lighthearted magical creature antics. There is a lot of violence and intense scenes including graphic animal cruelty early in the movie, as well as an undercurrent of political tensions. Because of this, this is one where it’s important to keep in mind the PG-13 rating and possibly pre-screen before taking young or more sensitive children to see. That said, if they viewed the other Fantastic Beasts films and the later Harry Potter installments without issue this is about in line with the darker content of those movies.

One of the main subplots running through the previous Fantastic Beasts movies was that of Credence and his desire to find out who he was and where he came from. Unfortunately, much of this storyline is brushed aside as a second thought in this movie which is too bad. We do learn that Credence is a Dumbledore, though he is not Albus’s brother but rather his nephew. Despite the storyline being rushed, foster and adoptive youth may relate strongly to Credence’s story. There’s an intense battle sequence where we see Credence confront Albus, filled with hurt and rage at the idea that he intentionally abandoned him. We also see Credence sending messages in the mirror expressing how alone he feels and his desire to ‘come home’. All of these different experiences may echo the complicated feelings some children have in relation to their biological families. 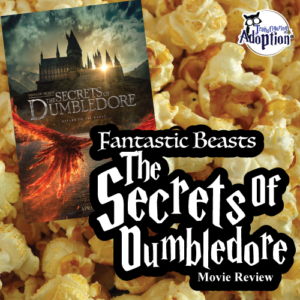