From the Cover of Dr. Strange in the Multiverse of Madness by Disney/Marvel:

“In Marvel Studios’ “Doctor Strange in the Multiverse of Madness,” the MCU unlocks the Multiverse and pushes its boundaries further than ever before. Journey into the unknown with Doctor Strange, who, with the help of mystical allies both old and new, traverses the mind-bending and dangerous alternate realities of the Multiverse to confront a mysterious new adversary.”

Doctor Strange in the Multiverse of Madness (2022) is the newest installment in the Marvel Cinematic Universe (MCU) and builds on the stories from Doctor Strange, WandaVision, and Spiderman: No Way Home. While the movie is technically watchable on its own, it will likely be much easier to follow and understand if you’ve seen at least these three installments prior to viewing. The movie opens with an intense fight sequence of Doctor Strange battling monsters in space, and it never really slows down from there. The movie has a few quiet moments but for the most part it hurtles from action sequence to action sequence which can be challenging for children and teens who have trouble coming back down from an adrenaline rush, as is often the case for those who have experienced trauma. The tone of the movie is also much darker than previous MCU installments and leans more towards the Horror genre than the superhero one. This one is definitely one to approach with caution, even for older youth and those who have handled previous Marvel films without issue. There are a few jump scares and in addition to a LOT of violence, there are a number of scenes that are gory and macabre. We recommend this is one that you absolutely pre-screen before taking youth and perhaps even skip it, at least until you are able to watch at home and take breaks and better control the viewing experience.

This movie doesn’t really relate to foster care or adoption specifically, however most of the main characters in the MCU (Marvel Cinematic Universe) have traumatic childhoods and backstories involving their parents. But none of those backstories are explored very deeply in this installment, though we do see a brief scene of traumatic separation of America from her parents. We also learn that America can travel the Multiverse but has no control over it. Children in foster and adoptive placements will likely relate strongly to her feelings of loneliness and isolation from peers, separation from her parents, and sudden environment changes.

Jenn is a central Virginia native who received her BA in Psychology from the University of Virginia in 2012. Since then she has worked for a local mental health agency and the Department of Social Services in various capacities and has been involved in her community’s efforts to create a Trauma Informed Network. Currently Jenn works in vocational rehab and mentors youth in foster care. When she isn’t working, Jenn enjoys writing stories, watching Marvel movies, visiting theme parks, and spending time with her nieces and nephew. 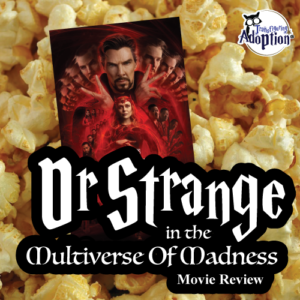