Transfiguring Adoption awarded this game 3 Hoots out of 5 based on how useful it will be for a foster/adoptive family. [Learn more about our Hoot grading system here]

From the Cover of Bravely Default II by Square Enix:

Bravely Default II is set in a new world from prior games, on a continent named Excillant, divided into five different kingdoms. The game follows four main characters; a young sailor named Seth, a refugee princess named Gloria, a traveling scholar named Elvis, and a mercenary named Adelle. The four main characters set off across the continent to retrieve the crystals of the four elements in order to fight the ultimate evil that is threatening their world.

About the Author: Star Simon

Star Simon is an avid gamer with a Bachelor of Science Degree in Psychology from Virginia Commonwealth University. An adopted child themself, they worked from 2013-2014 as a residential counselor at a group home for at-risk teenage boys, and has continued to volunteer with the program in the years since. When they aren’t volunteering and fundraising for charity, they enjoy jogging, cosplaying, and spending time with their plethora of pets. 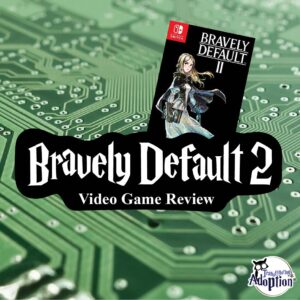