Ron’s Gone Wrong is a computer animated film which was orchestrated by 20th Century Studios. The film as a whole seems to be created for the general public and specifically for families with children all the way from elementary school through high school age. The animated work has a lot of action sequences and zany characters which help it appeal to younger children. The general premise and message of the storyline will reach out to middle school and high school students most. Even though this film was delivered for the general public, I want to explore in more detail below how this film will hit home for foster and adoptive families or any family which has experienced adverse childhood experiences.

The overall plot of the story follows the life of Barney, who is a middle school aged boy and is the only person in his school who doesn’t have a B-bot (one part robot friend and one part social media tool). Barney finds himself as a social outcast amongst his peers due to the fact that he doesn’t have a B-bot and cannot seem to fit in with the crowd. Barney’s widower father purchases his son a defective B-bot for his birthday and wacky adventures ensue as soon as Barney opens the box. The rest of the film deals with Barney and his B-bot, Ron, learning and discovering how to build a real friendship amongst gags about social media and Ron’s quirky nature.

Are there any trauma triggers in this film? Yes. There are a few topics which parents need to be aware of while going into this movie experience. However, it would seem that the positive discussion themes in the movie would outweigh the negative. I will explore all of this in the comprehensive review.

Stepping back from my role as the reviewer, I found that I was laughing at the various jokes throughout the film. The plot seemed to move quickly, and I found myself interested throughout the duration of the story. I heard equal amounts of laughter coming from children as I did from adults in the movie theater where I was viewing this film. It was good for me to see an animated movie which I felt rivaled that of a Disney/Pixar film. In fact, after quickly scanning movie trailers, I thought this was made by king Disney but only realized my mistake when I didn’t see the iconic castle before the movie.

It is safe to say after viewing the film that it was not intended specifically for a foster and adoptive audience. However, the theme of making and maintaining healthy friendships/relationships is so important for children from foster care, adoption, and childhood adverse experiences that Ron’s Gone Wrong is going to be a significant tool for parents. Many times children from traumatic backgrounds have not had how to make and maintain healthy relationships modeled for them. Children may give away their brand new and expensive toys to other children in order to “buy” friendships which ultimately will not last. Ron’s Gone Wrong explores the idea of kids seeking attention online as opposed to creating “real” and lasting friendships. Forming healthy relationships is going to be the cornerstone for success in our children’s lives. I would suggest that this film will attack heavy issues, such as cyber-bullying, in a light-hearted atmosphere and a fun plot. 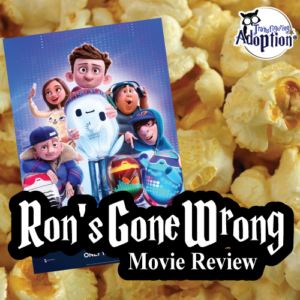