This film is a cute, animated, family comedy. It contains some big lessons and themes interspersed with enough humor to keep it a light-hearted film, which can be enjoyed by the whole family. While it has received just average reviews from the general public, I feel it is a gem for foster and adoptive families. Overall, I found it to be a movie which could inspire some great conversations about past trauma, families, behavior, and big feelings without being incredibly triggering.

There are several connections to foster care and adoption interwoven throughout this film. The movie opens with Bea and Thomas getting married, and the officiant mentions that Thomas is a new parent, or guardian, to the rabbits. The scene digresses into chaos as Peter yells, “You’re not my father. You’ll never be my father!” and kicks Thomas across the garden. Of course, thankfully, this is all happening in Peter’s head, and in reality, he remains calm and is asked to present the ring.

Three main characters in the movie—Peter, Thomas, and Barnabas—are orphans and discuss the loss of their father figures and related issues throughout the film. Thomas mentions his experiences living in an orphanage. Barnabas monologues about never knowing his dad and no one wanting to adopt him because he “got too old.” Bea essentially became a caregiver to the bunnies when they were orphaned.

About the Author: Margie Fink

Margie received her degree in psychology and has worked in various social work capacities. Margie has been chosen in the past to speak on Capitol Hill about the Refundable Adoption Tax Credit. She is a witty foster/adoptive mom who is able to give kids from hard places loving structure while providing unbelievable homemade cooking. Margie co-founded Community Kids, a resource and networking 501(c)3 created to assist foster, adoptive, and relative caregiver families. 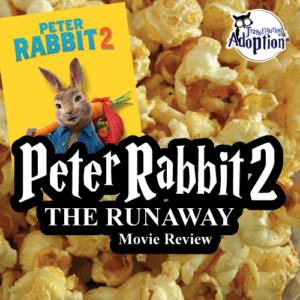