Clifford the Big Red Dog (2021) is a new family live-action movie based on the children’s books by Norman Bridwell. The movie is cute and fairly predictable though still enjoyable. It also had some surprisingly heavy moments that I was not expecting going into the movie. This includes some scenes of separation from loved ones that might be especially important to be aware of with kiddos who have experienced trauma. Overall, the target age-range is probably more upper-elementary or middle schoolers (the main character is aged up to be in middle school) and definitely aimed at an older audience than the picture-books and cartoon series which are marketed to the preschool crowd.

The movie does not directly relate to foster care or adoption, although Clifford the puppy is adopted by Emily Elizabeth and becomes a part of her family. While he is an animal, he is very much anthropomorphized as a character and children will likely relate to his story of being abandoned and alone and then taken in by Emily Elizabeth. Emily lives with her biological mother (and there is no mention of her father), though during the course of the movie she is being cared for by her uncle while her mom is away working. There are also themes about bullying and stigma that children who have experienced trauma are likely to relate to. 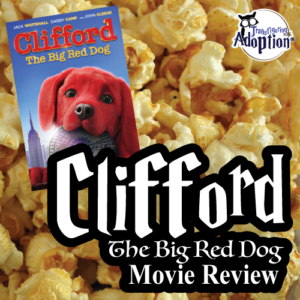