Iron Man 3 (2013) takes place shortly after the events of The Avengers and is part of the larger Marvel Cinematic Universe (MCU). While it can be viewed as a standalone film and still be an enjoyable action flick, it will make the most sense to viewers who have seen (at the very least) the first two Iron Man movies as well as The Avengers. The recommended audience would be older teens and adults, though some younger teens/pre-teens would probably do okay with it. The violence, language, etc. are in line with a typical superhero or action movie.

In this movie we see Tony Stark dealing with the aftermath of fighting in The Battle of New York – not only the fallout from fighting in a warzone, but having to deal with the realization that aliens are a very real threat. We also see him in a committed relationship for the first time, and has a fear of not being able to protect her from these increasingly dangerous threats.

Iron Man 3 does not directly relate to foster care or adoption. However, though it’s not addressed in this movie and he is now an adult, Tony Stark did lose his parents suddenly when he was a teenager. That loss, and a theme of trying to live up to his father’s legacy impacts many of his choices and behavior which is something that children in care may relate to.

One concept in this movie that is particularly relevant is that Tony is dealing with severe anxiety and PTSD following the events of the previous film in the series, The Avengers, where he essentially fought a war in New York against Loki and an alien army. While Tony had been in war zones and other conflicts before he’d never experienced large-scale combat in quite the same was as he did in the Battle of New York and its effects are still very much impacting him. And seeing someone like Tony: a rich, strong, masculine, superhero dealing with panic attacks on screen goes an incredibly long way in normalizing those feelings and reactions that our kiddos are dealing with. He also struggles to trust others, something youth in care are likely able to relate to as well. 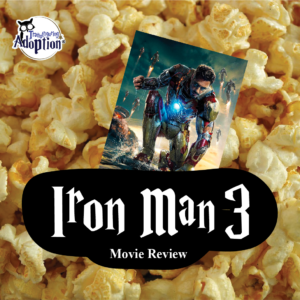