Eternals (2021) is the next Marvel installment that will be building the next Phase for the Marvel Cinematic Universe. Teens familiar with the Avengers and other heroes will likely be interested in this one though it does take place in a post-Avengers timeline. The target audience appears to be teens 13 and up. Caregivers should note this is not a “kids’ movie” and will have more mature themes and a longer run time due to this being a film for a more mature audience. This movie is not recommended for child viewing.

Overall the film itself was a great action film but is very long and has a complex story-line that younger children will not understand. There are some violence and sexual scenes as well that are not suitable for younger audiences. Just because a film has superheroes does not immediately make it a kid-friendly movie and parents should always consider MPAA ratings before taking their children to movies even before considering potential trauma triggering.

While characters are not explicitly in foster or adoptive care, the Eternals are shown through time living and interacting with one another as a sort of blended family. With this comes love and support but also conflict and strife, especially when truth is withheld concerning the Eternals origins and true mission.

While your child may not have the backstory that Ajak, Sersi, Ikaris, Kingo, Thena, Gilgamesh, Phastos, Makkari, and Sprite share in discovering their entire existence is a lie… if they have been through adoption or the child welfare system they will likely have a lot of questions as they grow up about their own origin story. And rightfully so! Think about America’s obsession with ancestry DNA testing in the last decade as a most recent example of how aware humans are of their origins and connections. Just like any other person, your child is going to have questions about where they come from and how this influences their identity and their future. It’s tempting for caregivers to want to brush these questions away because the questions are hard to answer, literally and emotionally. We may not know the answers and be afraid of what our child will find out. Caregivers may also worry that newfound information could drive a wedge between them and the child they care for. However, caregivers should remember that raising a child of any sort will come with hard questions and situations because of the complexity that is being human and that it is our responsibility to help guide our children through these complex concerns so they are not alone with these intense emotions and situations. Ultimately, helping your child answer their innermost questions may be what that child needs to complete grief processing and find acceptance while we all want for our traumatized children. Of course, all inquiries need to be in compliance with state and federal laws and age appropriate so please glean on the knowledge and experience of your team and therapist as you and your child potentially forge ahead on such a quest. The more support the better on such a journey!

Rachael B. Rathe is an East Tennessee native with a Bachelor of Arts Degree in
Psychology with a Minor in Child & Family Studies from The University of Tennessee
Knoxville. She has worked in mental health since 2013 and in foster care/adoptions for a private provider agency since 2014. Rachael was inspired to work in the field after
working with children and teens on a volunteer basis 2008 – 2013. Rachael’s ideal
self-care day involves snuggling on a couch with her kitties (Tabitha, Fergus, and Rufus) while enjoying a good movie or book. She also enjoys galavanting around conventions concerning all things nerd and geekery.

Transfiguring Adoption is a nonprofit organization seeking to nurture growth in foster and adoptive
families by giving a HOOT about their families. Transfiguring Adoption does not intend for its
reviewers nor its reviews to be professional, medical or legal advice. These reviews and discussion
guides are intended to help parents to better be able to connect and understand their children who
come from traumatic backgrounds 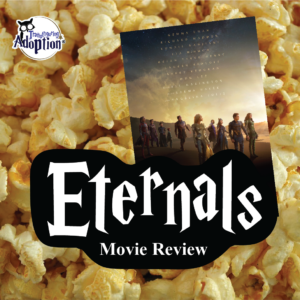