Dune (2021) is a new adaptation of the 1965 novel by Frank Herbert. Dune has a pretty large cult following and is often credited as the inspiration for other movies of the genre including Star Wars and The Matrix. It should also be noted that this is only part one of a two-part movie that will cover the plot of the first book and it does end on a bit of a cliffhanger without much being resolved. From a purely cinematic standpoint the movie is cinematographically impressive with stunning visuals, a well-composed score, and excellent acting.

That said, this is definitely one for older teens and adults. While it wasn’t particularly graphic, there was a LOT of violence. The movie is also very slow moving and has a complex plot that isn’t likely to be particularly interesting to younger viewers. It’s also over 2.5 hours long and is fairly heavy with almost no light-hearted moments to break up the seriousness, especially after the initial introduction of the characters. Another thing to note is that the sound mixing is a bit uneven — the action scenes are extremely loud compared to dialogue-heavy ones. This can easily be adjusted when viewing at home but if you’re seeing it in the theatre, it may be an issue for those who have sensory sensitivity.

This movie does not directly relate to foster care or adoption. However, there are some themes that foster and adoptive families may find relatable. Paul and his family move to a new planet that is extremely different from what they’re used to. They have to adjust not only to a new environment but also adapt to living alongside an indigenous culture. Adjusting to new and unfamiliar environments is something foster and adoptive children experience frequently as they change homes and/or schools, sometimes even moving to an entirely new community or even country. With these moves come new customs or rules that children, like Paul, have to learn in order to thrive in their new environment. Paul also has to deal with the loss of his father during the movie and ends up alone in a new and dangerous place with just his mother, with whom he has a more tumultuous relationship. 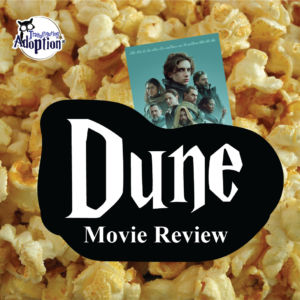